-- Jingdezhen's history of ceramic-making dates back over 2,000 years. Its role as an official and royal kiln pushed its porcelain-making techniques to the highest in history.

-- This year's Jingdezhen China International Ceramic Fair, scheduled from Oct. 18 to 22, has attracted more than 800 enterprises.

-- The fair is a platform displaying the latest exhibits in Jingdezhen, east China's Jiangxi Province, which connects all in the industry and serves as a window for tourists to know China's porcelain capital.

When Ekrem Yazici took a 16-hour slow train for the first time in 2009 from Shanghai to Jingdezhen, a city he had always wanted to visit, he saw his dream life.

"I arrived at about 4 a.m. and waited for the sun to rise. When the city gradually awoke, a magic scene unfolded in front of me. I saw a passer-by holding a large blue and white pattern vase and another hauling a load of porcelain blanks," recalled the 38-year-old Turkish ceramic artist.

"Porcelain can be seen in every corner of the city, and almost everyone in the street is doing things related to it. If you like ceramics, this is your paradise," he said. 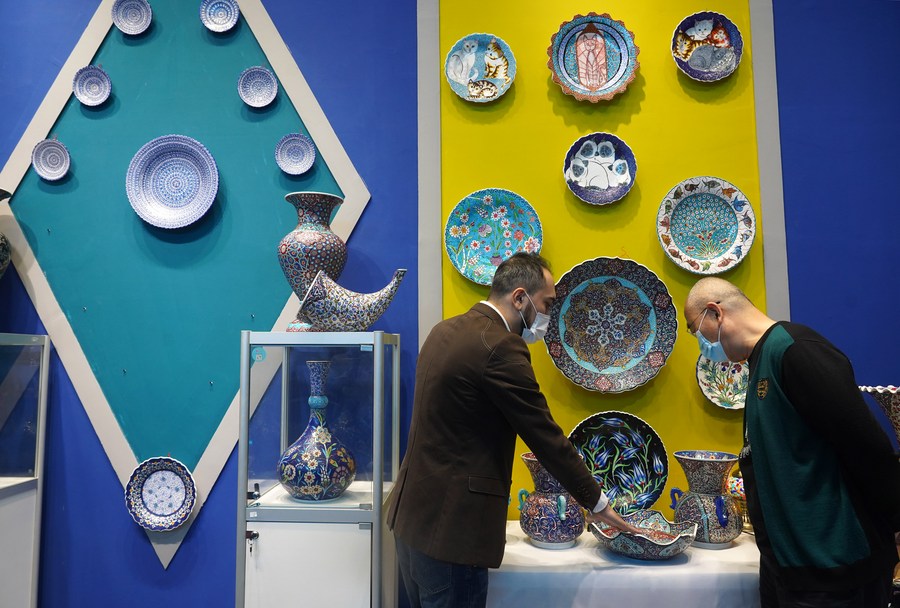 Jingdezhen, a small city in the mountains of east China's Jiangxi Province, is best known as China's porcelain capital. On the world stage, it is another word for China's quality ceramics.

Jingdezhen's history of ceramic-making dates back over 2,000 years. Its role as an official and royal kiln pushed its porcelain-making techniques to the highest in history. Now it boasts over 8,300 ceramic enterprises and more than 9,800 self-employed ceramic practitioners. About one-tenth of its population is engaged in related businesses.

Yazici's first encounter with Jingdezhen was at the Topkapi Palace Museum in Istanbul, where the Chinese characters of Jingdezhen were engraved on a piece of blue and white porcelain, the most representative pattern of Chinese ceramics known to overseas art collectors.

A university student majoring in ceramic art in Turkey back then, Yazici made a bold decision after graduation -- to come to China. "There were 10 students in my class and nine of them went to the European countries. I had already learned so much about Western ceramics, but I barely knew how the art was in its cradleland and wanted to fill in the blanks," he noted.

Yazici immediately moved to Jingdezhen after finishing a language course in Shanghai.

Yazici combines Turkish patterns with Chinese blue and white porcelain. "About 70 percent of my artworks are orphan works. I often post my works on WeChat and those who are interested will come to purchase," he said.

This year's edition, scheduled from Oct. 18 to 22, has attracted more than 800 enterprises.

"The ceramic fair is a platform displaying the latest exhibits in Jingdezhen. It connects all the people in the industry and is a good window for tourists to know Jingdezhen," said Yazici.

French artist Camille Kami moved between the Netherlands, Britain and Switzerland before settling down in Jingdezhen in 2015. "How can there be such a city where an industry has been going wholeheartedly for a thousand years?" She fell in love with the city instantly.

"It used to be difficult for me to stay in one place for two years, but Jingdezhen is totally different," she said. "I've been here a couple of times before settling down and every time I leave, it was like something powerful attracted me to come back."

Born in a small city in southern France, Kami now speaks fluent Chinese and runs two workshops in Jingdezhen. She sometimes draws inspirations from China's fairy tales, but spices up with a French-style imagination.

Originated from the Southern Song dynasty some 900 years ago, Tenmoku uses iron black glaze and white ash glaze in making the porcelain, allowing the black pattern to appear on the surface after firing.

Takayanagi was deeply attracted when she saw a piece of Tenmoku in a museum in Japan. "You can see the interplay of light and shadow on the cup," recalled Takayanagi.

In 2013, the couple moved to Jingdezhen, which they deem "the best place for pottery."

"Constantly innovating while maintaining deeply rooted in life, in my perspective, is where the ceramic industry is heading," Wen said, adding that Jingdezhen is a place where ideas collide and inspiration never ebbs.

"Jingdezhen offers opportunities for all international artists to learn about Chinese culture, exchange on an international level and benefit from each other's cultural experiences," echoed British artist Guy Thompson.

Most foreign potters in Jingdezhen rely on the internet to sell their artwork. Livestreaming in recent years has also become a burgeoning industry in the city.

The Taoxichuan ceramic art avenue alone is home to over 2,600 livestreaming workshops on popular Chinese video-sharing app Douyin, with sales exceeding 2 billion yuan (about 311 million U.S. dollars) as of September this year.

At the ongoing ceramic fair, an online flagship store of Jingdezhen porcelain was also launched on Taobao, China's major e-commerce platform to help boost sales and expand the market.

"Being settled in one place and having my work going all over the world, I have felt the magic combination of the thousand-year-old history and the modern age of internet here," said Kami.

To ceramic artists, the glory of the ancient porcelain capital never fades. "There's no other city that validates porcelain in such a way. So I plan to stay here," said Ryan Labar, an American artist.

"Jingdezhen is very inclusive. Whether you are an artist, designer, businessperson or tourist, if you want to make porcelain, as long as you have an idea, the city can help you make it," said Yazici.