-- Online game providers can only offer one-hour services to minors from 8 p.m. to 9 p.m. on Fridays, Saturdays and Sundays, as well as on official holidays.

-- With poor self-control, kids and adolescents are vulnerable to losing themselves in the virtual world, child psychologists said.

-- Expert said the latest move is a response to the unchecked profit-seeking nature of the gaming industry that banks on the high possibility of incurring addiction.

Each generation of children has their popular games, be it a football match in the playground or jigsaw puzzle. As digital times arrived, online video games began to take the spotlight.

But it has a dark side -- online gaming is far more addictive than its predecessors, and it has become a global challenge, as any kid who has access to a mobile device and the internet can fall victim.

China has roughly 158 million internet users aged between six and 19, accounting for 15.7 percent of the country's total netizens.

The Chinese government this week took a bold step against the malaise of gaming addiction, rolling out tough measures to limit the minors' gaming exposure, raising eyebrows and winning applause from home and abroad.

Dubbed the "strictest-ever" regulations targeting online gaming, the rules announced by the National Press and Publication Administration (NPPA) stipulate that online game providers can only offer one-hour services to minors from 8 p.m. to 9 p.m. on Fridays, Saturdays and Sundays, as well as on official holidays.

It requires strict implementation of real-name registration and logins, saying that online game providers must not provide any form of game service to users who fail to register and log in using their real identifications.

Buoyed by huge private investment, China's gaming industry witnessed a boom in recent years, but the problem of addiction has also drawn huge attention from parents, educators and society at large, calling for government action to curtail the influence of capital.

Data from the China Internet Network Information Center showed that the annual revenue of China's gaming industry surged to 278.7 billion yuan (about 43 billion U.S. dollars) in 2020, up 20.71 percent from the previous year. The sector of mobile gaming contributed to over 75 percent of the total revenue.

With poor self-control, kids and adolescents are vulnerable to losing themselves in the virtual world, child psychologists said.

A research report on the internet usage by minors in 2020 revealed that "more than 60 percent of underage netizens frequently play games online, with mobile gaming making up for 56 percent."

Observers have warned that online gaming addiction has adverse effects on kids, affecting their physical and mental health as well as academic performances, stirring up tensions between them and their parents, and even increasing the risk of youth crime.

"It's time for our country to head-on address this problem," said Tong Lihua, director of the Beijing Children's Legal Aid and Research Center, adding that the latest move is a response to the unchecked profit-seeking nature of the gaming industry that banks on the high possibility of incurring addiction.

"The enterprises should not develop at the expense of the interests and growth of the next generation," he said.

Calling for efforts from all sectors of society, the NPPA said it will guide gaming providers to join hands with parents and schools to jointly build a sound environment for children's development.

SUPPORT FROM PARENTS AT HOME AND ABROAD

Wang Jiaqi, the mother of a fifth-grader in Beijing's Chaoyang District, hailed the news, saying that fellow parents in her neighborhood also lauded the new regulation on social media channels.

The online gaming ban is not new to China. The NPPA issued a notice in 2019 to limit the amount of time spent on gaming by minors, which laid a foundation for preventing minors' addiction to video games. But many parents thought it was still loose and suggested it be further strengthened.

"As the companies are trying to boost the design of online games to attract more customers, we parents are struggling to protect our children from 'the scourge,'" Wang said.

In a survey conducted by the Beijing Children's Legal Aid and Research Center, some parents believed that limited exposure is an effective approach to handling gaming addiction, while some respondents suggested employing technologies like face identification to ensure implementation of real-name registration and logins.

As the Republic of Korea (ROK) also confronts the problem of online game addiction among adolescents, some ROK parents lauded China's move, saying that "China is really doing well" and "I hope (we) introduce strong restrictions on online games among primary school students following China," as was quoted by the newspaper Chosun Ilbo.

Han Xuewen, principal of a middle school from northwest China's Xinjiang Uygur Autonomous Region, said as children spend less time on online games, they will have time to do more meaningful things such as talking and playing with their friends and other kids.

The Chinese government has attached great importance to children's growth. Along with the online gaming regulation, a nationwide education overhaul is in full swing, focusing on reducing the burdens of students and parents by limiting the free-wheeling development of the for-profit tutoring industry, or cram schools.

Schools are also asked to recalibrate homework assignments and improve their classroom teaching and after-class services. 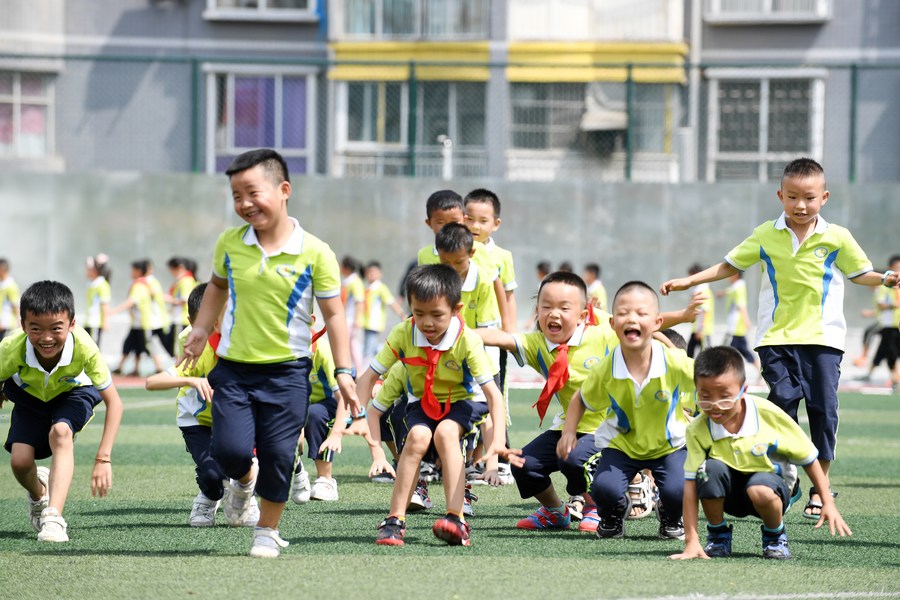 Students have PE classes on the playground at a primary school in Renhuai, southwest China's Guizhou Province, Sept. 1, 2021. (Photo by Chen Yong/Xinhua)

Liu Chunyan, the mother of a pupil in the southern city of Guangzhou, feels more at ease and relieved with her son having less homework and more time to spend on developing his interest.

"Now schools lay more emphasis on designing courses and providing after-school services, which is beneficial for children to cultivate hobbies and comprehensive qualities, as well as to improve physical fitness," she said.

Dai Yanmiao, associate professor at Shanghai University of Sport, said another benefit of the recent education sector overhaul is that kids will have more time to do sports, which is good for their growth and lays a systematic basis for their all-round development.