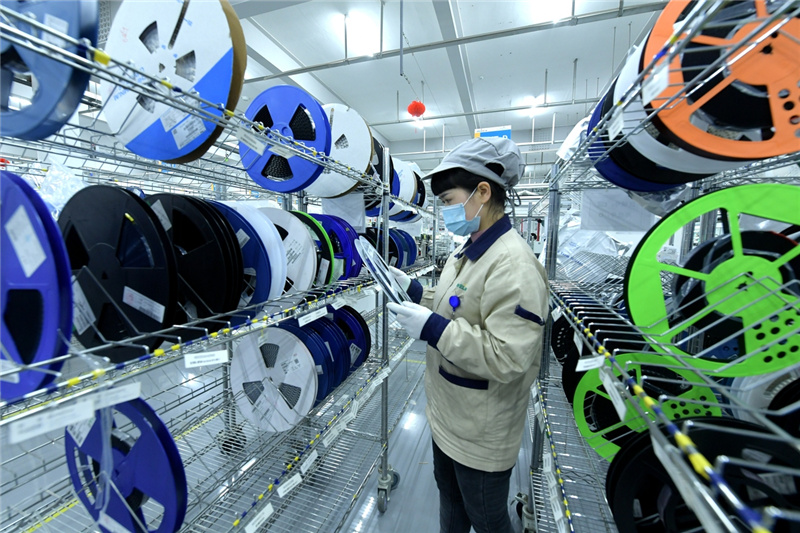 A technician works on the production line of a circuit board in a high-tech company in Hai'an, Jiangsu province. [Photo/Xinhua]

According to the Ministry of Industry and Information Technology, little giant companies refer to leading SMEs that specialize in niche sectors, command a high market share, boast strong innovative capacity and core technologies. Industry experts said that they are comparable to "hidden champions" of Germany－small-sized leaders in highly specialized global markets.

MIIT data showed 90 percent of the third batch of little giants are from the manufacturing sector, with 80 percent of them topping the market share in a certain vertical niche in their own provinces.

A report from CITIC Securities found that listed little giant companies have outperformed other types of companies in terms of revenue growth and potential profitability. The former will likely become the future hidden champions like those in Germany, and might even go on to make big contributions to the nation's manufacturing sector.

As of last week, more than 300 little giant companies listed in the A-share market boasted total market value of over 2.96 trillion yuan ($457 billion). The 10-year average net profit growth rate of such companies is about 28 percent, significantly higher than that of companies in other sectors.

By 2025, China aims to grow 10,000 little giant companies and 1,000 single-product champion enterprises. This goal marks an important strategic step aimed at boosting the resilience of the manufacturing industry chain to be more self-supporting and competitive in the bottleneck sectors.

As of now, the country has already identified 4,762 such little giant companies. More than one-fifth of them have a market share of 50 percent each in the domestic market. They can be found in major national-level projects, including space exploration and high-speed railways, the MIIT said.

The CITIC Securities report noted that the ROE, or return on equity, rates of listed little giant companies saw a steady increase since 2015 and had reached 10 percent on average.

At the same time, the combined gross profit rate of such companies also exceeded that of those listed on the ChiNext board of the Shenzhen Stock Exchange, reflecting that the core competitiveness of such companies has improved greatly.

With a research and development rate of 6 percent, listed little giant companies outpaced the overall A-share market, but the figure is significantly lower than that of companies listed on the Science and Technology Innovation Board, or the STAR Market of the Shanghai Stock Exchange.

Notably, they have maintained a positive growth rate and relatively high capital expenditure during the COVID-19 pandemic last year, which showed that such companies were less affected by the pandemic and were still growing rapidly.

"For China, innovation capabilities and well-rounded supply chains have played an increasingly prominent role during its economic development. The little giant companies, which are able to fill in certain weak niches for the country, will help improve the industry and supply chains, and enable China to become a manufacturing powerhouse," said Li Chao, chief economist of Zheshang Securities.

"On the other hand, the country's latest move to support little giant companies has helped them achieve technological breakthroughs, innovations and upgrades, and furthermore, boosted their core competitiveness in the face of increasing global competition."