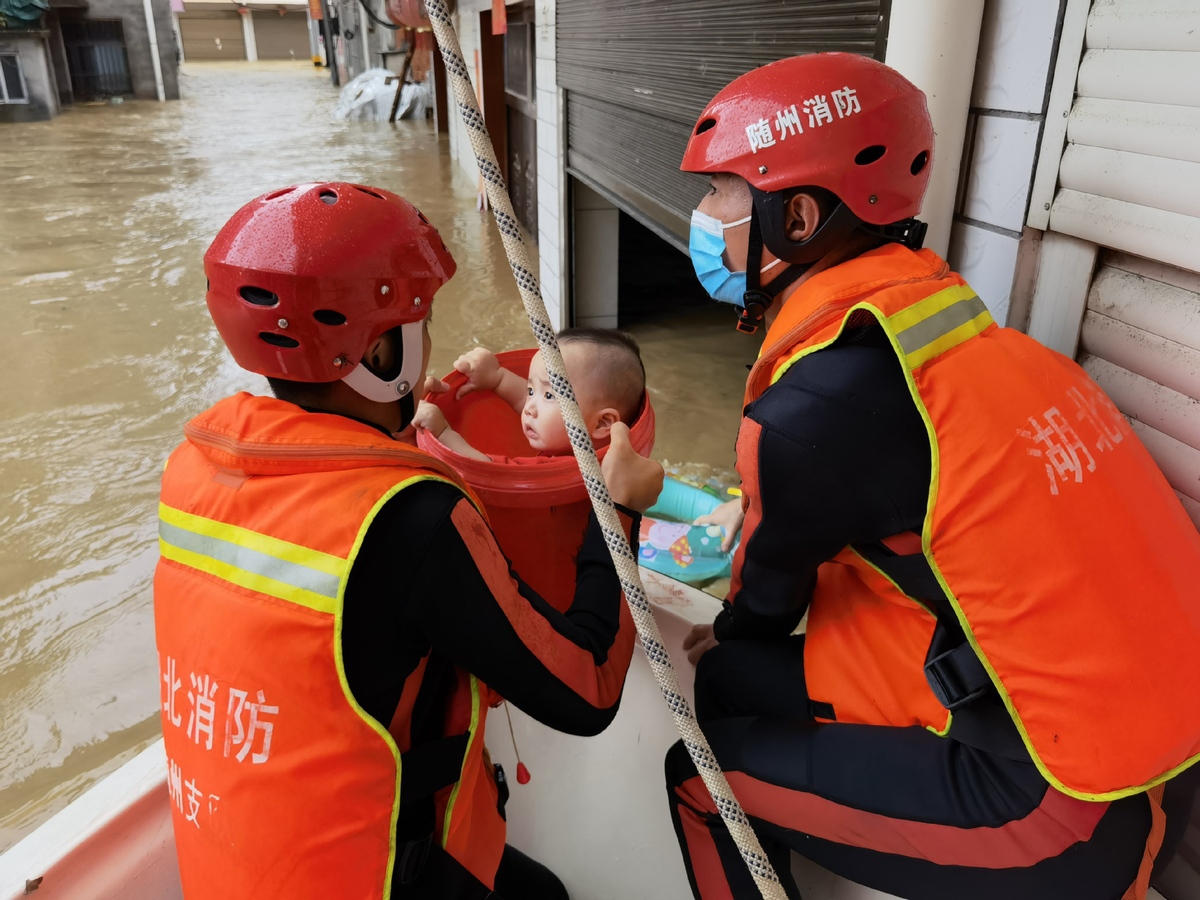 Rescuers transfer a baby to safety from a flooded house in Hedian township in Suizhou, Hubei province, Aug 12, 2021. [Photo/Xinhua]

Rain is expected to continue across China this week, with some provinces suspending production, closing roads, issuing alerts and evacuating residents to prevent flooding disasters.

From Tuesday through Thursday, North, East and Central China will see heavy rain and parts of the northern provinces of Shanxi and Hebei as well as Beijing are forecast to be hit by hail, the National Meteorological Center said.

On Monday morning, Central China's Hubei province urged the suspension of production by factories and the evacuation of residents from places where rain poses a danger. Six cities or counties in Hubei issued red alerts for heavy rain, the highest level in a four-tier warning system, local media reported.

Elsewhere, meteorologists warned that East China's Shandong province will see strong winds and rainstorms for the next few days. They said residents need to be alert to the danger of landslides and protect themselves from wind.

From Saturday to Sunday, Shaanxi's 94 counties saw rainfall, with Mianxian county hit by about 230 millimeters of precipitation, the most across the nation over the weekend, the National Meteorological Center said.

About 11,600 people in the county were affected by the rain, with water and electricity supplies cut in some areas. Floodwaters reached pedestrians' knees and hundreds of cars were inundated. Local authorities were busy repairing power facilities and communication equipment.

"On Sunday, my car was flooded before I realized how serious the situation was. I've never seen such heavy rain in the county. That was rare," a resident surnamed Zhao told local media.

A video taken in Ankang, a city in Shaanxi province, on Sunday showed part of a road beside a river that also served as a dike collapsing due to continuous rainfall. All the residents in an apartment block meters away from the road had been evacuated, the local government said.

Three staff members of a telecommunication company who were sent to repair phone lines in Xi'an, the provincial capital, on Thursday are missing. Rescue teams are still searching for them, local media reported.

Chen Tao, chief forecaster from the National Meteorological Center, said the latest rainstorms are moving quickly and will not stay in the same place for long.

"Although the rain is not as extreme as that in July, we still need to be cautious about the accumulated impacts brought by continuous rain, especially in disaster-hit provinces like Henan, Sichuan and Shaanxi," he said.