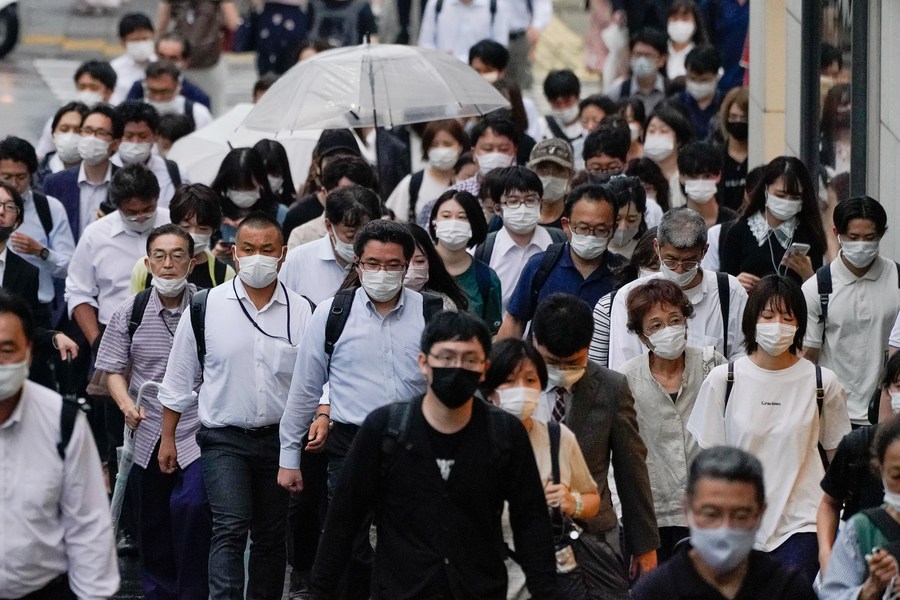 Pedestrians walk across a street in Tokyo, Japan on July 8, 2021. (Photo by Christopher Jue/Xinhua)

An official said the actual number of new cases is possibly higher than the reported figures since Japan's COVID-19 test capacity has been unable to meet the growing demand.

The seven-day average of new daily cases in Tokyo increased by 20.1 percent from the previous week to reach 4,774.4. The figure of severely ill patients in the capital dropped by one to 274.

The daily number of new COVID-19 cases in Japan exceeded 23,000 for the first time on Wednesday with 23,918 cases, surpassing the earlier record of 20,361 logged on Friday.

The health ministry said the number of infected patients with severe symptoms countrywide stood at 1,716 as of Wednesday, striking an all-time high for the sixth day in a row. The tally rose by 70 from the day before.

Shigeru Omi, Japan's top COVID-19 adviser, said Thursday that the actual number of new cases is possibly higher than the reported figures since the country's COVID-19 test capacity has been unable to meet the growing demand.

At an off-session meeting of the Diet, Omi restated the necessity to reduce the flow of people in Tokyo by half from the level in the first half of July.

"It is extremely important for the central and local governments to deal with the situation while keeping in mind that this is a disaster," he said.

"There is room for improvement in the way of sending messages to the public" as the government has failed to win cooperation from the entire society, he added.